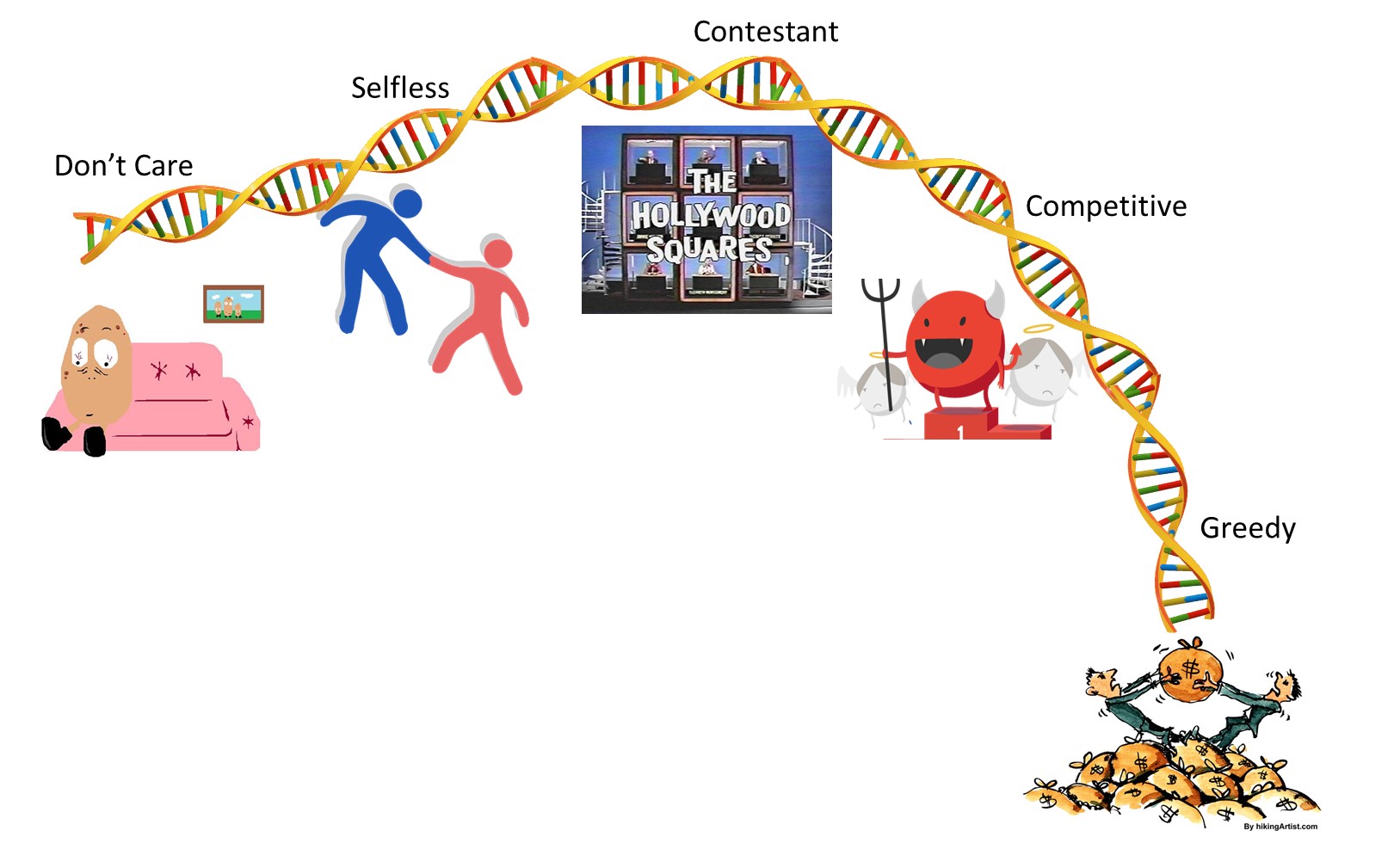 If you dislike articles filled with random thoughts and uncertainties, then this one is not for you. I am trying to figure out if competition is something universal. Or is competition something, we (humans) have replaced with the primal survival instincts.

And I don’t even mean competitiveness in the ‘I must propagate my genetic makeup.’ A modern equivalent would be ‘I bought a whole planet. Do you have a planet? Because if you don’t, you can look at mine — then you can tell me how amazing I am for owning it.’

It is the boastful competitiveness, which brings on a strong sense of envy and greed and drives some of us homo-sapiens to accumulate to excess. So, I am going to try to sum-up and preen it down into a short essay.

Who knows? But we do know that mass clumps together, and that is why we have large objects such as the Earth, our solar system, and the Milky Way. If you try to squeeze atoms together, the kinetic energy causes the atoms to bounce off each other.

Black holes are an example of mass going a tad far with competitiveness. Black holes eat everything smaller than themselves, including smaller black holes. It is a competitive scenario if the black hole knows that it is bigger than another black hole, and it just wants to prove a point in the schoolyard of space.

Personally, it seems unlikely that a black hole has any more reasoning intelligence than the ocean. If it did, a black hole would know that once it ate its competitor, there would be nothing left to compete with for millions, even billions of years.

Looking at atomic particles more closely, atoms seem happy the way they are, floating about until they bump into another particle. Atoms will share electrons, ‘Share,’ and make their journey on together. An atom does not seem to realise that it must share or fight with other atoms.

If atoms were to have a persona, it would seem the atom does not trust other atoms with its stuff. It is extremely unlikely that an atom would fuse with another atom without being told to play nice by a stronger force.

Single cells start to resemble, what you would consider, a fighting instinct. Cells are smart and know how to spot a virus. The DNA responsible for cell replication must fight the foreign information from a disease or virus trying to reprogram it. That is why we need to stay away from foods and drinks with DNA damaging free radicals.

Cells and viruses fight for territory, and they appear to make a conscious effort to do this. It is a thinking process, but the all-important gloating seems to be missing. If an evil virus wins that battle, the virus won’t stand at the top of the dead cell, taking a selfie. The virus uses the cell to replicate and produce more virus cells.

Beyond the scale of insects and on to the creature with larger brains, you start to see greater comparisons with humans. Dolphins and killer whales tease their kills with horrific food games, like some form of power play. This seems to be where nature gets taken over by nurture, where we are taught to interact with others in a specific way.

A gorilla will fight to the end to be the dominant breeder in a group. Other gorillas that venture into the group to mate are met to get a strong bout of chest-beating, before getting charged and beaten to death. On winning a fight, the alpha will put on a show of celebration with some insane hollering.

Then you get to the most intelligent creatures we know, us. We are not the only creature to talk, and other animals will tease others with the prey they have caught. Humans like to show the power they have over others.

For some, proof of power is a giant wristwatch covered in diamonds. For others, it is running a country, and they have everything yet still want more.

Poverty is a major issue, which we pool together as a community and try to alleviate in ways that we understand. For some individuals, it is more cost-effective to pay rather than use their time. Any form of charity is admirable, but there is a point where we all think that we can do more.

The need to eat is a basic instinct. The more fat we store, the better our chances of surviving a long winter, and the larger our muscles get. If a human alpha loses, it means that the alpha lost a lot of money on the stock market, or we just discovered they were faking it all along.

Sport is a fantastic thing to be a part of, whether it be lone sports or team games such as football, a game keeps the mind sharp, and the drive is competition. And you do not even need to compete against an opponent. A personal best is a terrible opponent to play against. It is possible to beat everyone in the world at their own game, but you can never beat your best.

Keep going! And forget about the rest because there really is no one else better than you when it comes to doing the right thing. If buying vintage cars or watched are you think, do it, and keep going. If you prefer to be the best at building marble racing tracks, do it and keep upping your earlier attempts.

Sports is not an issue, but it does highlight the aspect of human nature that is the problem. There are plenty of athletes, which show the rest of us how to lose with dignity.

And plenty of athletes that stopped when they hit their 30s, a common time to retire. Athletes that got what they needed out of their profession or were told that they had to move on.

Where it all becomes grey — possessions. ‘WE’ need food, a home, possibly a form of transport to get to work, clothes to keep us warm, and something more accurate than a sundial. Catering to these needs are many companies that appeal to the budgeted consumer and to those that do not care how much it costs.

In order to satisfy the competitive nature of a person that no longer needs to fight to survive, the most expensive become survival. The latest smartphone is trumped by the same phone covered in diamonds.

A home must have a pool and twice as many bedrooms as they could ever use. A car must go 2 times faster than you could ever drive it on a normal road, even if you do not care about getting caught. Even giving to charity is done as a form of competition with other players.

How much is too much? This comes back to trying to best your best; it is not possible as you can always increase the boundaries and earn more, spend more, and give more.

Is it a simple case of insecurity? The less secure we are about a thing we do, the more we look for a thing that others cannot compete with. Say that I like to collect cereal boxes. Another person will imitate the collection and try to own more, not because they enjoy it, but because it offers them an area of control.

This is a competition of irritation, and the first to snap is the looser. Competition is about having fun with like-minded people and giving encouragement. If you are in the competition to compete and boast, then you do not belong there.

The competitions to ignore are the ones that celebrate bad sportsmanship. There is no need to take part in a race to the bottom, take the moral high ground, lose with dignity, and win with respect.

How many times have you been told that money is; not everything, the key to happiness, the end to all your problems? I would think, never. It is the type of thing that you tell yourself and strangely, regardless of how much money you have. Living from paycheck to paycheck or millions in the bank and worrying about a bad investment.

Is it justified to have billions, even when it means you can give more to charity than thousands of middle-income families? Is it better for everyone on the planet to have a 1000 Pounds/Euros/Dollars a month, a free home, a free car the same, etc…? They tried that in many countries, and always the result is a dictatorship.

If it were plotted on a graph of DNA.

Then both, Don’t Care and Greedy, are mental diseases that need treatment. Apathy is no way to go through life. We need to care, to help and to build each other up. Greed is the simple act of accumulating more than we need. And it is often the case that those with these issues need telling.

Maybe what it comes down to is love. The greedy are substituting the love they crave with the admiration and envy from others. Don’t Care has given up trying, and the ones we need to follow are those contestants happy to play the game.