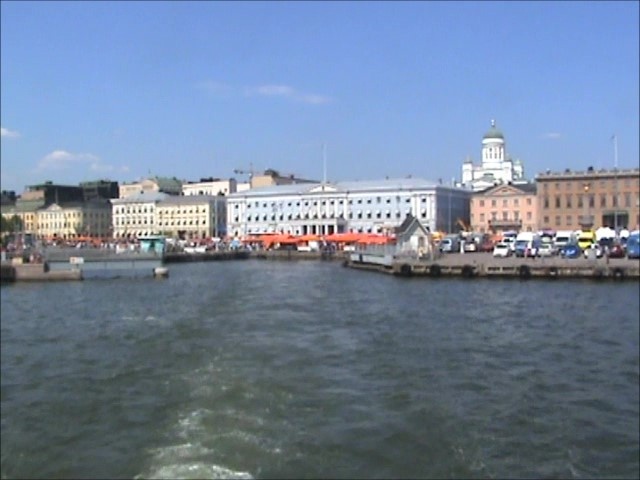 This part of a larger collection of stories originating from a 2011 10-day cruise starting from Rotterdam. We travelled up to the Baltic Sea, through the Gulf of Finland, to Copenhagen, Rostock, Tallinn, St. Petersburg, Helsinki, then Stockholm before returning to Rotterdam.

Sweden had control of Finland from the 13th century and built the Sveaborg fort in the 18th century to protect the harbour from invasion.

Helsinki has long standing ties with neighbouring St. Petersburg. Alexander the I of Russia deposed the Swedish rule in the Finnish war of 1808-1809.

By 1812 the Tsar moved the capital from Turku to Helsinki. Alexanders I made himself Grand Duke of Finland, and his rule is evident throughout the city in its architecture.

This was the middle of summer, we landed at the main harbour in on the 10th of June, and it was hot. We came in from St. Petersburg, along the Gulf of Finland, the route was densely packed with small islands.

It is an easy country to visit, there are no issues at border control, and getting to the city is easy.

We had flown to Helsinki in the winter prior to this trip, Helsinki has a very modern well equipped, small international airport. It is impressive watching the snow-ploughs clearing the runway between take-offs, and de-icing of the planes.

The cruise offers coach rides to the city’s Railway Square it is an achievable distance to walk, if you are good on your feet.

The coach dropped us near the main train station for a reasonable price, and it made a pleasant change to be able to walk around the city in shorts and a t-shirt.

The Railway Square is a good place to start the station, is a grand 19th century, beautifully designed facia that leads into 19-platforms.

A main train line runs from the airport to the city centers of Helsinki and St. Petersburg. The station also connects to the Metro, Holiday Inn, and various restaurants.

If you are the consumer orientated traveller, the main Kamppi shopping center is close by, offering the same shops that you can find anywhere in the world.

The square has a lot to offer in the summertime, often holding festivals, and is on a massive scale made more impressive because of the surrounding buildings.

There are many museums in Helsinki, but the Ateneum is the grandest of them. The Ateneum Art Museum, also on the square and could easily be a palace, is very reminiscent of St. Petersburg.

The Statue of 19th century author Aleksis Kivi, sits on the square in front of the Finnish National Theatre.

The Metro runs the length of the coast. Unless there is a reason to have a look at the station, the best choice for getting around is to walk or get a taxi.

Taxis are good since all drivers in Finland must take two tests, one for winter driving on ice, and a the less demanding regular test.

Drinking and driving is highly illegal, so you will not be hailing a drunk taxi driver. Taxis are not cheap, but in the winter, the reason is more to get out of the icy wind.

If you are still around the main square, there are plenty of restaurants, bars, and outlets to choose from. In the wintertime we ate dinner at a restaurant that no longer seems to exist, overlooking the square.

It is a big city so there is no lack of restaurant themes, including a hardrock cafe.

Apart from the powdered egg they use in the winter to make scrambled eggs, there was not one bad meal presented to us. Finland has a close association with the arctic and the seafood is amazing.

Arctic char is of the same family as salmon and apart from the colour there really is little difference in the taste.

Deer-meat is on offer in every restaurant, the common jokes about Bambi often crops up, but the fact is that deer-meat makes an extremely good steak.

A reasonable walk away from the square, to the south harbour, takes you past the Helsinki Cathedral. The cathedral is a tribute to the Grand Duke of Finland, Alexander I, from the 19th century.

Going past the Cathedral, you will arrive at the South Harbour. The harbour it is a good place to grab a seafood snack, book a bay tour, visit some of the islands, or just enjoy the view.

There are many small islands surrounding the city that need a small boat to reach. We took a wonderful, 90-minute-long tourist trip, on a small boat, to view the Sveaborg.

The Castle of Finland, Suomenlinna [Sveaborg in Swedish], is a relic of Sweden’s rule, and built of several small islands. Tourists regularly visit the fort in the summer via boats, like the one we took, to tour the fort.

The fort sits on of 6 islands that offering a picnic site and some museum exhibits. The short cruise did not give you enough time to get off to look around.

Helsinki is very much a summer city. The winter makes everything look stark, especially the less well-designed building that were built outside of the square to replace those that were destroyed in WWII.

The local food is all about the bases of food, more so in the winter. That is not a complaint it is extremely delicious food, and when it is cold exactly the type of thing that you need to eat potatoes and meat; starch and protein.

People, very friendly, straight to the point, no messing about mentality. They like their beer and Koskenkorva Vodka, a drink that will have you walking into a lamppost after the second glass.

If a choice came about to go back in the winter, then it would be to use Helsinki to go further north as we have done in the past.

If you are planning to go to Finland for a once-in -a-lifetime-trip, save that opportunity for the winter. Go up past the arctic circle, take a trip on an icebreaker. See the Northern Lights and Santa, then book your trip to visit Helsinki in the summer.