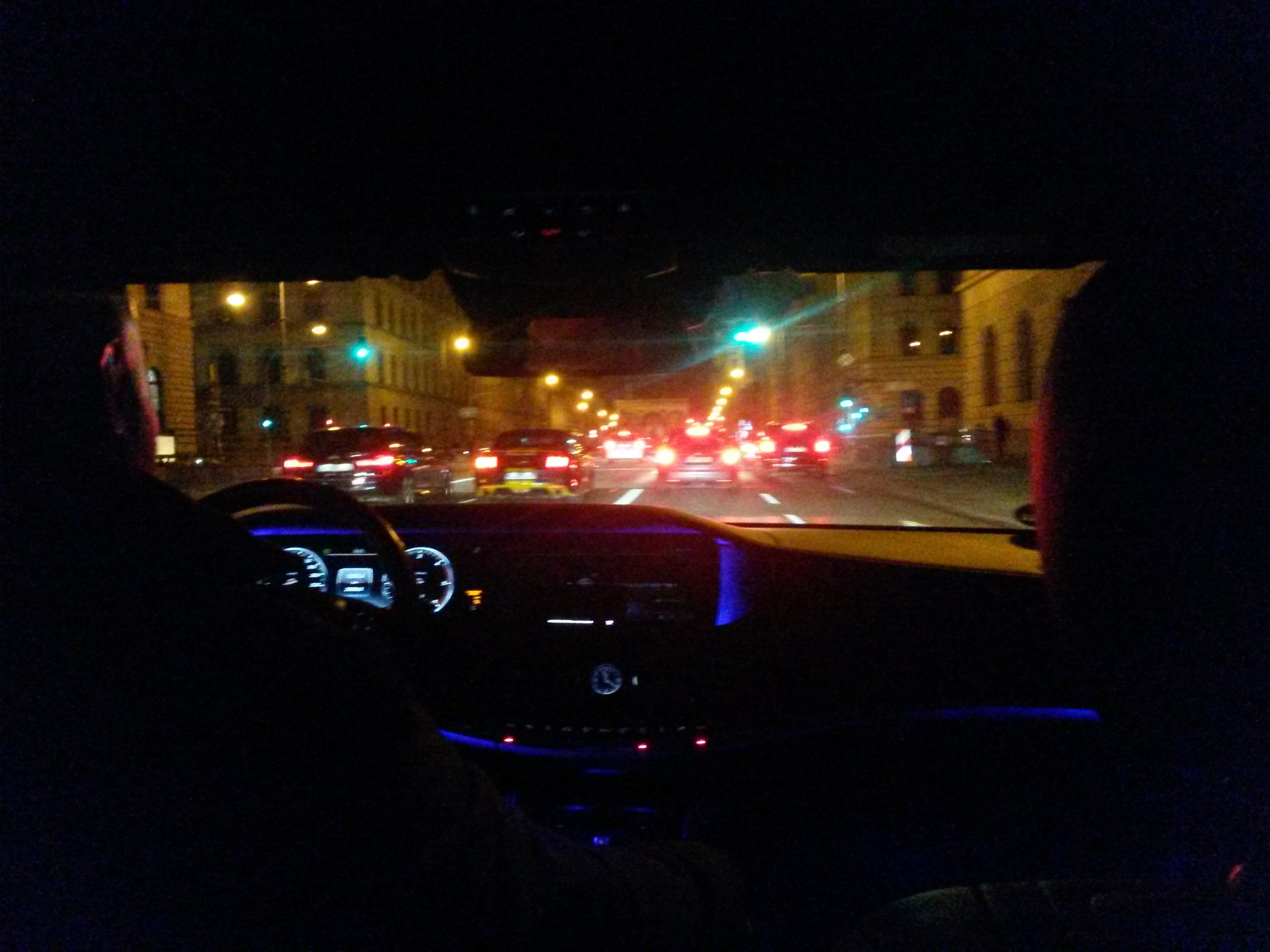 2017 had been a tough year and it was only May. A job that was getting crappier by the day, combined with a lack of sleep was not helping the mood.

The Gorillaz were due to perform in Munich in November, it was a good opportunity to have a holiday, and go to Munich to see them perform live.

We bought concert tickets first, the moment I saw they were on tour we had to get tickets.

The Zenith is an old train workshop that had been restored and repurposed as an exhibition hall. It was going to be a good place to see them, a 10,000 person capacity in an unvisited city.

We had concert tickets. A flight, somewhere to stay and a baby sitter for a week, were relatively easy fixes.

Munich has a sizable international airport, and it is possible to fly direct from most locations in  the world. Another gateway into the city is by train, Munich’s Central station is a phenomenal sight on its own.

Munich is cold in the middle of November. The driver called to say that he was waiting outside.

Some rental companies offer a service, whereby they chauffeur you in their rentals and take to you to your destination for less than getting an airport taxi.

The cars offered are impressive, the packages range from medium saloons to luxury people carriers, you can choose the category, but they seem to give you the highest level that they aren’t using.

What a great surprise to be picked up at the airport terminal in a brand new – fully loaded – Mercedes S350. Highly recommended, a fantastic way to start the trip, and it wasn’t even that expensive.

The driver was a nice guy, and when we told him that we were there to see Gorillaz he very kindly played it at high volume through the infotainment system.

Munich has a very Christmassy feel in November: A cosy cold feel to it, everyone is getting ready for Christmas, and all the buildings look like they are purpose built for Santa’s workshops.

We booked 5 nights at the City-Hotel and came with a good continental breakfast thrown in with the price of the room.

It is on the border of the more expensive city centre hotels. The start of the shopping centre at Karlsplatz is a short 5-minute walk from the hotel.

The hotel had the added benefit of being near the metro, and main train station if you decide to catch a train up to the mountains.

Munich has so much to offer, it is really down to priorities of the visitor, do they like history, shopping, eating, drinking. We had a simple plan before leaving for Munich, just have a good time and get to the concert.

We got on the road by 10 am and walked in the wrong direction for a half-hour (completely my fault) past the central station and going past the beautifully maintained Alter Botanischer Garten.

The Alter Botanischer is a small park sat in front of the District court, itself a wonderful Neo-Baroque styled building. Continuing in the wrong direction for an extra half-hour.

We later discovered the Glyptothek, a museum of Greek and Roman architecture. Greek culture has a strong presence in Bavaria, King Ludwig I had a love for its sculptures and Neolithic buildings.

Completely lost at this point, it seemed like a good time to pull out the map, which pointed us right. We had missed the Karlsplatz main city entrance and instead walked up along the MaximilliansPlatz to the Hofgarten park.

There are no shortages of parks or historical buildings in Munich, they are all awesome structures to see. Beer and food are more important for survival, lunch time was fast approaching, and we diverted ourselves to a restaurant.

We found a cosy table in the Augustiner am Platzl in, was a lucky find. Classic Bavarian food in a Beer hall setting. Everything is good there; the beer, the food, the atmosphere, the staff.

Reviewing the map again, it became apparent that we had circumvented the entire tourist centre of the city.

Given the chance to do it again, Karlplatz would have been the place to start off our touring, however, these little detours can result in pleasant surprises.

The next day was the day of the concert at the Zenith hall a little outside of town. The plan being, to get a train early and find somewhere to eat.

Resorting to Google maps due to lack of normal map reading ability, there was a restaurant near the Zenith station called Ilios.

It was raining hard, it was dark, and the light of the restaurant was drowned out by the streetlamp and signage by a golden McDonalds M further down the road.

It was early for dinner, the restaurant lights were on, and the carpark was empty but for one car. The menu in the doorway looked appealing, so we proceeded to enter.

The manager was standing in an otherwise empty dining room. The Manager explained that he was fully booked, but still made us a welcome with a good table as some more guests arrived.

It turned out to be a Greek taverna with a German twist. It was completely full by the end of our fantastic meal, a few pre-concert beers, and a couple of on-the-house ouzos.

The Zenith is a great venue, up close and personal, well organised. It was not much fun standing in the rain beforehand waiting for the security check, but very toasty inside, with floor to ceiling crates of beer at the ready.

The crush at the end to get the coats could have gone better, but even that was educational, and there was no shouting or violence.

The next day we went straight to Karlsplatz and into town. In the Square’s entrance, the toy shop – Obletter is worth a visit, they sell the typical toys as well as the serious collectables, trains and model car kits.

Then along the Neuhauser Street with all the shops, cheap and expensive. It would be fair to say that there is something for everyone.

Being so close to the mountains, there is no shortage of winter clothing; if you are looking for the chic shops, then head over to Maximillianstrabe.

It is probably a good time to point out that,  most Bavarian National Museums are closed on Monday. Something we discovered at the doorways of each Museum on our last day.

The gardens are still open so unless you have a particular exhibit in mind there is plenty of other things to see and do.

Munich’s Central Train Station, is huge. Built in 1849, it has had various extensions over the years, boasting over 40 lines. It is a station worth walking around and through, even if you don’t plan to go anywhere.

Being such a large station there is an excellent choice of restaurants around it. The final night, we both were suffering from terrible colds and had spent most of the day in bed.

Staying out of the rain and drinking tea, but a little fever was not going to stop the party.

L’Osteria is a chain restaurant in the old part of the station, great food, reasonable price and a great bar. In fact, the bar was a little too good.

The original idea was to build up some strength, go out for a quick meal, have a couple of pints, then get to bed early for the flight.

We ate a quick meal, had a couple of desserts, drank a load of German wine and white beers, then stumbled through the station taking selfies.

The only reason we remember is the videos I made cropped up on my phone when we got home.

The flight was a 5 am take off, we had to be out of the hotel by 3am and setting the alarm for 2am. The alarm started off, along with the worst hangovers ever.

It was a massive struggle to get cleaned up and down to the lobby, where we felt far from ready to get on a plane. A chauffeur  picked us up, this time in a Porsche Panamera with plush leather seats.

The driver was good, slow, and it was a shame we couldn’t enjoy the ride more. It would have been far worse on a bus or having to walk to the station.

We were, in a bad way, old enough to know better, just beginning a nightmare all night-flight battling intense nausea.

It is a shame to end the trip with a hangover, but it was still one of the most enjoyable visits in memory, and inexpensive.

So next time you are looking to see your favourite band in concert, check to see if Munich is one of the tour dates, because the diversion is well worth the trip.

One thought on “MUNICH – GERMANY”