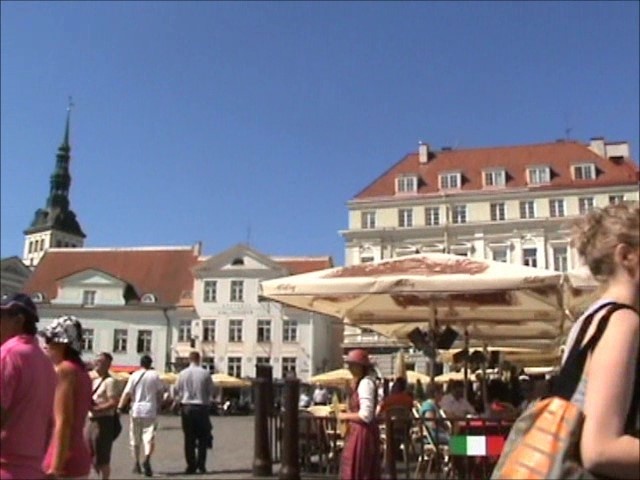 The Gulf of Finland separates Tallinn and Helsinki with 50 miles of sea. We sailed over 600 miles from Rostock to get to Estonia. Estonia is a small country with a smallish population, just over 1 million.

Tallinn has a rich history beyond ‘SKYPE’, with its’ habitation dating back over 11,000-years. Before Estonia gained its independence, it was occupied by the Swedish Empire, Nazi Germany, and Soviet Russia.

Unlike a lot of other ports on the cruise, this harbour is a short walk to the old town, around ¾-Mile(1km). A sense of direction is also not required since Toompea, the place where most tourists will want to shop and eat, is clearly visible from the port.

The walk is short, but it comes with a decent incline to get up to the main square, the other sites are too far to walk from the port. If you are infirm is might be advisable to book a shuttle bus to be dropped off at the top.

Fat Margret’s tower is visible on the walk from the port, it marks the beginning of the hill. The Tower is a coastal gate that once stood guard over the city with its cannons.

The tower now serves as a Museum. Visitors can go up on to the roof of the 16th-century structure to enjoy the panoramic view with a coffee or visit the exhibits for a small entrance fee.

Moving on from the Fat Margret’s tower up past the St Olaf’s church. The church was built in the 12th-century and the spire stands at 124 metres.

The Church owns an impressive Wind-organ, set at the altar, as does the St. Nicholas church found in the centre of the town. If churches are not your thing then try walking a little further on, to the main square.

Tallinn opens up its Christmas Market every year, from the middle of November to the first week of January. In the summer, the municipality puts on a different type of markets, including a Medieval re-enactment.

The stalls sell knitwear, Babushka dolls, as well as local foods. The town square is a good stopping point to eat and sample local refreshments.

Reaching the square seems like a real accomplishment for such a short walk, one to be rewarded with food and beer. There is a distinct Bavarian feel to Tallinn, not only in the style, but the culture.

Not mentioning the name of the restaurant we ate in, we only drank and ate snacks there, plus it has terrible reviews. Suffice to say, the restaurant was fine for us, the square is big, and there are many restaurants to choose from.

Estonian food is similar to Bavarian food, rye bread, sausage, schnitzel, and a variety of pickled vegetables are common. Beer is the drink, they have some good brewers in Estonia, that make a superb IPA and Stout.

These beers are strong, 5% is considered standard larger, but why would anyone want to settle for that? The beer taps of standard larger are set right next to 10% pale lagers, and other beers that are far more interesting.

One of the most visible landmarks that sites on the Toompea, the 64-meter tall Spire marks the placement of Tallinn town hall and overlooks the main square.

The Townhall built in the 14th century and survived an onslaught of wars over its lifespan, it was bombed built along with the rest of Tallinn in WWII.

The Seaplane Harbour Museum (opened 2012). The Harbour museum looks interesting, we missed it. The Museum exhibits among other things, the full-sized WWII submarine Lembit, and a decommissioned ice-breaker built-in 1917.

If you have time, try to visit the Tallinn TV Tower to take some photos from. The tower, situated a-car-trip outside of town, has a viewing platform and a restaurant that needs to be booked in advance.

Diners have a views over the Tallinn Botanic Gardens while enjoying high-end meals.

Toompea is mostly pedestrianised, there are buses, trams. Trains take passengers to other parts of the city and cities in other countries, such as Moscow.

Tallinn has a small-scale International airport, taking flights from most of Europe and Moscow. The airport is near town, flying is a good way to get to Tallinn. .

Swissotel and the Radisson blue sky both offer top floor panoramic restaurants, with top quality rooms that are actually reasonably priced for the rating.

Tallinn has a big range of accommodation on offer for less money, depending on the location desired. On Toompea there are many furnished apartments that make getting to town a simple step outside the door.

Tallinn is a city that you go to, not knowing what you are going to get. The town is nice, the people are friendly, and the country has a lot going for it.

Two-days is enough, there are many other central European cities to visit. Helsinki is a two hour ferry ride away, so it would be possible to visit both countries simultaneously.

If we flew to Estonia and we would try to visit the land neighbours of; Latvia, Belarus, and Lithuania. Estonia has plenty of museums and tourists flock to them from the cruise boats.

A short visit is more than justified and visitors will not be disappointed with their trip. It would make a great place to go at Christmas for the Markets, in substitution for the other countries in the area.

If travelling on a cruise, it is worth tearing yourself away from the nachos bar and taking the time to look around the town.