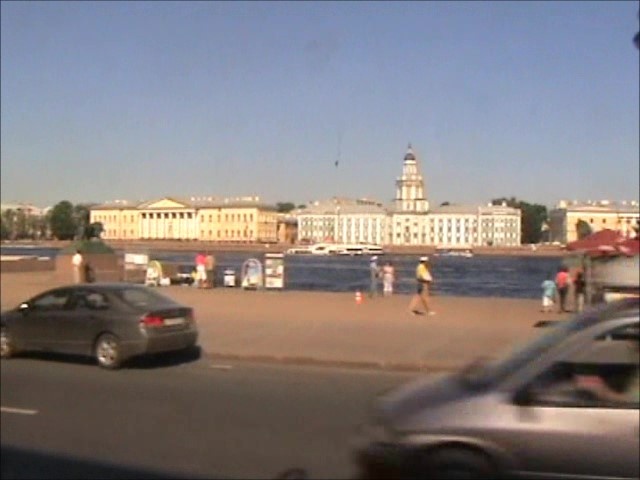 This is a trip that goes back to 2011 on-board  Holland America’s MS Rotterdam. Part of a larger collection of stories on a cruise from The Netherlands and through the Gulf of Finland.

St. Petersburg is Russia with a European feel. A beautiful city that we were lucky enough to visit.

We were fortunate enough to have tickets to go on a ten-day cruise, with one of the destinations being St. Petersburg. We had spent a couple of days in 80s-Moscow, in August, and it was cold.

Russia wasn’t really built for tourists. St. Petersburg, renamed Leningrad for a while, has always been considered as the Venice of the North. It is a city that is as high, up on most people bucket lists, as it is in the hemisphere. It is home the the Bolshoi Kamenny Theatre, memorials of composers such as Tchaikovsky, and the start of the USSR.

The history, of this most northerly metropolis in the world, goes back to the 17th Century. Peter the Great loved it so much that he moved the capital from Moscow.

Peter the Great emplaced a decree, that no building may be built taller than the Winter Palace. The city was designed on the modern western style, popular at the time.

Some monuments have been rebuilt over the years, but the work is impeccable. The municipality looks after the baroque fascias well.

The buildings have a royal grandeur to them, similar to that of Moscow. Everything seems to be on a scale 50% bigger than anywhere else in the western world.

Do not take this as 100% correct, but at the time we wanted to go to St. Petersburg, hop off the boat, get out of the harbour, and just stroll around the city.

As EU citizens we needed tourist visas, and good luck trying to get a visa on your own. The organised tours that are available from the cruises, get you a tourist stamp.

We needed a private van to facilitate a family member with a large electric wheelchair. If you do the tour bus with someone that is infirm, it could easily be an hour queue at the terminal going through security.

So, check with the cruise operator directly on the practicality of onshore trips.

To cut this part short, it is near on impossible to get a tourist visa independently. Do not think that you can just fly in and get a visa at the immigration desk, it can take months.

If flying and seeing the sites in your own time is something that you really want to do, start by calling your local Embassy.

St. Petersburg is worth visiting, the people are friendly, it has a remarkably familiar European feel, and the architecture is simply astounding.

It is also a big city, with over 5 Million inhabitants, and is the 2nd largest city in Russia. There are also plenty of traffic jams, but that is also not a bad thing on a single day coach tour, as it allows for a slower speed to capture all the scenery through a camera.

The coach took us over the Neva River several times, and if the name ‘Neva’ makes it sound fantastical, it is. The Neva river is the 4th largest in Europe, fed from Lake Ladoga, it is truly immense.

The coach ride stopped a few times on the edge of this beastly river to let us visit the various historical landmarks that run along the banks.

The Rostral Column on Strelka, is one such stop on the river. The column built at the beginning of the 19th century, was used as a land beacon, illuminated at night by a giant gas flame.

The beacon, from the river, marked the front of what used to be the St. Petersburg’s’ stock exchange. The stock exchange itself was moved to another location, and now Greek revival building takes the role of the city’s Central Naval Museum.

Another equally impressive landmark clearly visible from the river, seemingly covering the expanse of the river, is the Winter Palace.

For over 200 hundred years, until as recently as the 20th century, this 1500 room palace was home to the Tsars of Russia. He loved France and aspired to give the city a European feel.

Baroque interior and exterior architectural features are beautifully maintained and admired by over 3 million visitors a year.

The Church of the Saviour on Blood sits in (apologies my poor geography if not true) the centre of the city, on the edge of the- venetian styled- Griboedov Canal.

The Church has particular significance as it marks the spot where Emperor Alexander II was assassinated in March 1881.

Train stations can be either, dull and depressing, or made to look like the Avtovo Metro station. Built in 1955, the station is held up with Greek styled columns, marble walls, and illuminated with glass chandeliers.

If it was not for the trains going through the middle of it, the platforms could be easily mistaken for being a palace hallway.

Not sure this was allowed but we went off on our own, they had warm picnic boxes ready on the coach, and we had a little baby to feed. Around the corner, away from the church and the rest of the coach party, was a bar.

Possibly called Dom 7 – we ducked in to get a bite. The staff seemed mystified that we were on our own, but duly gave us menus in English, and some alcohol. Set up as a small night spot with live music, good food, and so was the beer.

We got back to the coach, bellies full, and had a little sleep on the way back to the boat.

100% worth the visit, a day burning around on a coach is definitely not enough time to see it all. It would take 3-4 days to really get around the museums and parks, if you rushed, a week may about do it.

St. Petersburg is as charming as it is imposing. Everything is big, the stations are big. roads are big, everything is so big. It may be different now, but if you are going for the first time, try to make it easy and go on a package holiday.

The Visa issue was the only thing that seemed a problem, but then we didn’t try that hard to get one. We were cruising and the worst that would happened, after not getting a visa, is that we would have had to stay on the boat.

It is a City worth making the effort to visit, because there really is only one other place similar, Moscow, and to point out the obvious that is in Russia too.