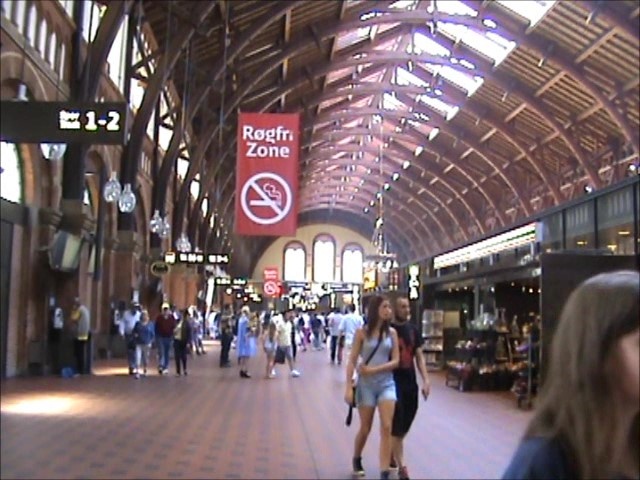 This is the 1st part of the June 2011 trip on-board Holland Americas MS Rotterdam. This is a part of a larger collection of stories originating from a cruise from Holland, up to the Baltic sea, and through the Gulf of Finland. Now arriving at the City of Copenhagen.

After leaving from the port of Rotterdam the ship sailed through the great the Keringhuis Flood barrier. It is a giant flood gate constructed at the entrance to the Rotterdam Harbour.

We spent 2 days travelling up in to the North Sea, past the coast of the Netherlands then Denmark, as we entered the Skagerrak Sea.

The cruise facilities its passengers to eat 24 hours a day at one of the many buffets laid on around the ship. I had put on 13 Lb at the end of the 10-day cruise.

The Skagerrak connects to the shallow Kattegat sea that spans the coasts of Sweden and Denmark.

On a clear day, you can see both countries from the entrance to the sea, the cat line converges the close that you get to the fjords.

Disembarking from the Port of Copenhagen is a straightforward process, no heavy queues getting through customs of out of the port.

One of the first things you notice is that it is super clean, the roads are clean, the waterways are clean and well kept, and the air smells fresh.

Many of the passengers walked to the Little Mermaid Statue, a 20th Century bronze statue, with a connection to Hans Christian Anderson.

Commissioned by the founder of Carlsberg, that overlooks the sea. With a 1-year-old in tow, we were not going to mess about and walked straight to the train station.

We followed the crowd leaving the ship, on the half-mile walk Østerport Station, and from there travelled to the Norresport Station.

Walking south past the Kings Garden, an expansive park that again is home to Rosenberg castle, Exhibiting the Royal crown jewels.

There is certainly a better way to do get from the port to the centre of town. The City of Copenhagen has an extensive public transport system, including a Metro.

We didn’t know better, it was a nice day, and walked to the centre of town. Walking generally gives a better impression of where you are in town, plus you can better interact with the environment.

Amagertorv- (Amager Square) is the main square, through which the high street runs, in the centre of which stands the Stork Fountain. This is as good a place as anywhere to start, for shopping and food.

Amager Square is the place where the most expensive shops and restaurants are. Venturing in any direction away from the square leads to more modest venues for eating and shopping.

It was a sweltering day, we needed a place to relax, and put together more of a plan of action. We went to Café Norden, the staff were good, and provided well for a baby and two tired parents.

The café has a beautiful view over the square, and a cool beer, helps with the pain of looking at a tourist map in public.

After we had made a suitable mess on the floor with baby food, we had a plan of action, and set off with no sense of direction.

We knew that we wanted to get to the Central train station. Stations always seem to have the most fascinating architecture. We walked west ending up at the great wall surrounding the Tivoli Gardens.

The Garden could be considered the Disney Land of Denmark, and along with the second oldest amusement park in the world.

The layout of the Gardens also has a hotel and theatres. Unfortunately, we did not have enough time to see any of this other than the wall, as we moved to the main station.

Copenhagen’s’ Central train station, at the time, was about ready to celebrate a 100-year anniversary. This part of the train line marks the departure and arrival point of the main gateway to Sweden.

The building connects the main lines to the Metro and ring lines, as well as accommodating various shops and restaurants.

The station is right next to the Tivoli garden, so if you are in the area, it is worth having a look at the draught iron structure within.

Another city that we only had a day in. We could have easily spent a week going around everywhere, and possibly spend time having a look at the rest of Denmark.

The Central station from The City of Copenhagen first leads into a 2.5-mile tunnel, then up on to a 5 miles bridge that is partially suspended.

We left Copenhagen’s port to visit the next destination of Rostock, Germany.

Shortly after leaving the port the boat went under this huge bridge with a few meters to spare from the underside of the carriageway. The Øresund Bridge that connects Denmark to Sweden, supports a very impressive motorway and railway

Cruises are good to give a taster of each city, but it can be a little sad that there is not enough time in each place to get acclimatised to the surroundings.

The restaurants were good, there is plenty to do, and see. The only thing about being so far north is that the weather is often poor. We were lucky on this trip and every single port we visited was having a heat wave.

We have fond memories of Denmark and if it was possible, we would do the cruise again, and go straight to the amusement park.

I would happily settle for a flight to The City of Copenhagen for a few days, and there are plenty of hotels near all the hotspots. If you are a history buff, there are various Hans Christian Anderson landmarks and museums make for a thoroughly enjoying trip.